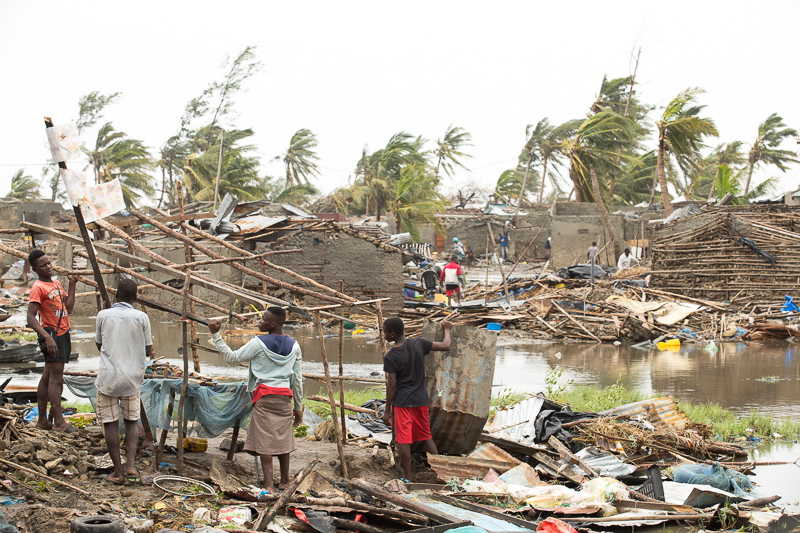 epa07447737 A handout photo made available by the International Federation of Red Cross (IFRC) showing people trying to salvage what is left of their homes in the destroyed neighbourhood of Praia Nova, Beira, Mozambique, after the cycloneTropical Cyclone Idai destroyed and damaged homes and knocked out electricity and communications on 15 March 2019, issued 18 March 2019. The IFRC state that Tropical Cyclone Idai made landfall on the evening of 14/15 March near the central Mozambican city of Beira. The cyclone – with maximum sustained winds estimated as between 170 and 190 km/h – brought torrential rains to Sofala, Zambezia, Manica and Inhambane provinces. The cyclone caused significant destruction in Beira – Mozambique’s fourth largest city with a population of over 500.000 – and surrounding villages. The full extent of the damages remain unclear as roads are cut off, including those leading to the city. Power and communications lines are down. An initial Red Cross aerial assessment estimated that about 90 per cent of the city and its surrounds was damaged or destroyed. EPA/Denis Onyodi / IFRC / HANDOUT MANDATORY CREDIT: IFRC HANDOUT EDITORIAL USE ONLY/NO SALES